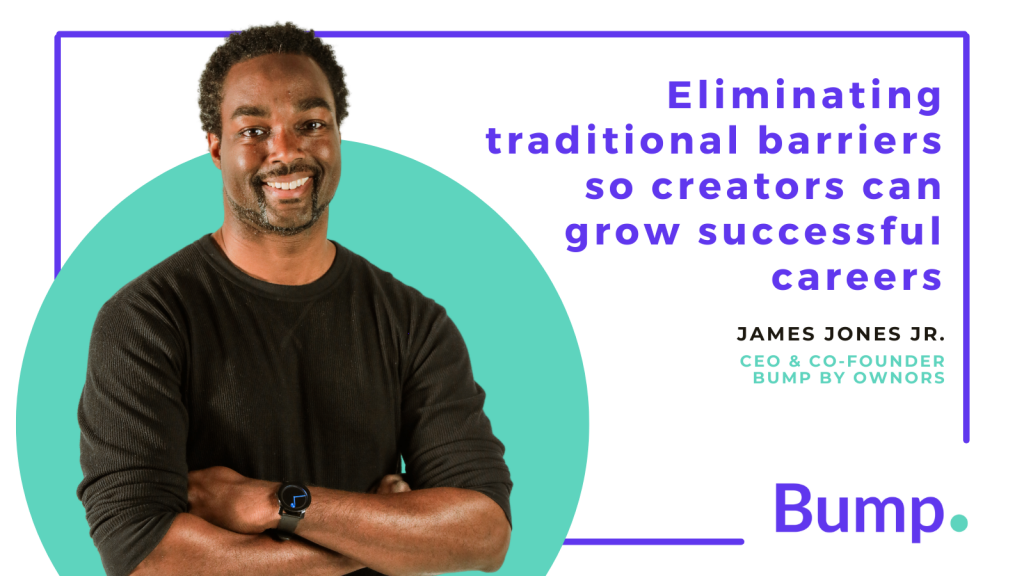 Bump by Ownors is, by definition, a startup — it was formed in 2020, and has gone through a seed round of financing. They were a perfect candidate for the Long Beach Accelerator.

But co-founder and CEO James Jones Jr. is far from a beginner in the world of creators and finance, and it shows. Bump by Ownors already has working partnerships with giants MasterCard and Snapchat. He says he comes by it naturally.

“My father was a software engineer, and a gospel musician,” Jones said. “He had five college degrees. But he couldn’t figure out how to get the churches to pay him.”

Jones’s goal, through Bump by Ownors, is, “to eliminate traditional barriers that creators face to receiving the resources and help that they need in order to have successful careers by leveraging technology to provide them with access to their hard-earned money, advances and industry executives,” according to the firm’s website.

The path to Bump by Ownors took Jones through the University of Florida law school, graduating in 2006. He began a practice that focused on business litigation. Many of his clients were recording artists and athletes looking to receive compensation for their talent.

“I was able to kind of connect the dots,” Jones said. “I learned a lot from my clients. There’s tons of friction between the creators and the record labels. The artists don’t have control of their destiny — they feared they would not be able to create wealth.”

Jones decided to take a detour — to the Harvard Business School for an executive MBA certificate. The program features professors who were entrepreneurs themselves — getting Jones excited about the possibilities.

Jones and his co-founder, Trudy Kirabo, started helping with individual mentoring and Artificial Intelligence-powered software. And the logical next step was providing a financial platform.

The software allowed Bump to generate the data needed to allow creators — and industry executives — to track their earnings. Jones said the creators looked at the data more carefully, so Jones and Bump decided to concentrate there.

Jones and his team were part of the first cohort of startups in the LBA, a partnership of the Cal State Long Beach Institute of Innovation and Entrepreneurship, the venture capital firm Sunstone Management and the city of Long Beach’s Economic Development Department. Jones said he was impressed with the emphasis on diversity at LBA.

“We wanted to align with someone with our values,” Jones said. “We did our research on Sunstone (and it fit).

“There were a lot of really great sessions,” he added. “It helped us understand the market, our customers… It gave us the framework to build a great company.”

Jones and Bump by Ownors have stayed in the Sunstone and LBA families as they expanded to start serving TikTok influencers, podcasters, athletes and other creators. Jones has returned to speak with subsequent LBA cohorts and continues to participate in networking opportunities with potential investors.

And then there are the partners.

“When we were able to connect with MasterCard, it gave us instant credibility,” Jones said. “With the partnership with Snapchat, that’s where the 18 to 35 (year-old) creators are. We’re helping them create their own businesses.”

Jones said he expects Bump by Ownors to expand exponentially, ultimately going global. To follow the progress (or participate), go to usebump.com.