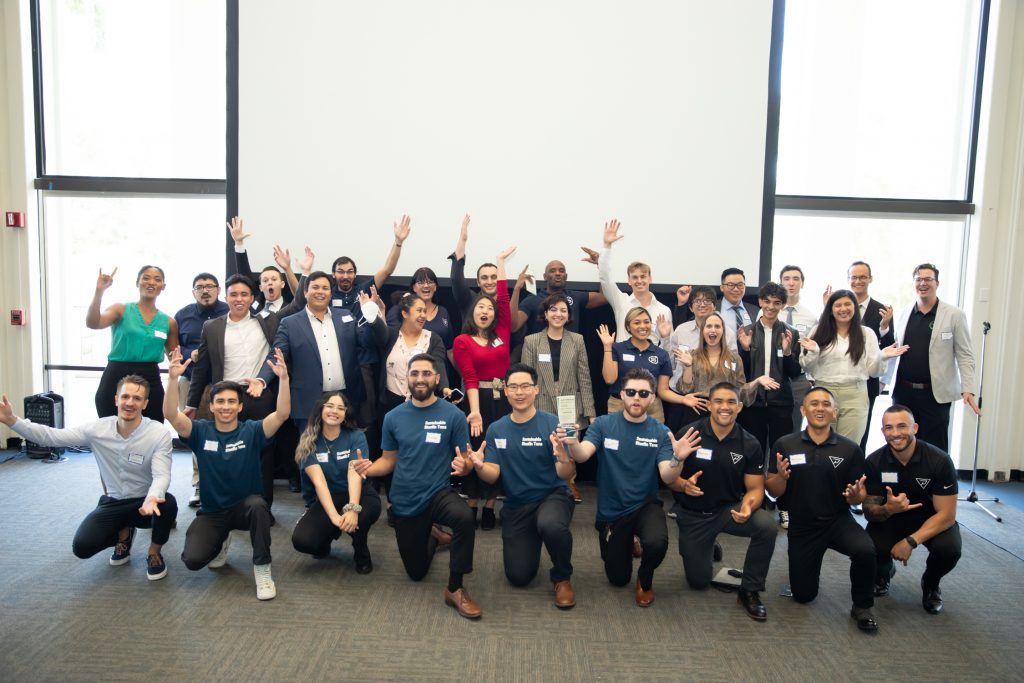 At stake was $130,000 in prizes donated by the Sunstone Foundation, the nonprofit arm of Sunstone Management. The concept was a pitch competition from students involved in innovation, entrepreneurship and business incubator programs at California States Long Beach, Fullerton, Los Angeles, Dominguez Hills, Northridge and Cal Poly Pomona.

Teams were divided into three tracks of startup businesses — products, services and social enterprises. Sunstone provided $25,000 for first, $10,000 for second and $5,000 for third in each track.

After two hours of pitches, judges for each track gathered to make their decisions while the students had lunch. Then everyone gathered for the awards.

In the Products category, Bryan Ruef’s 10-8 Systems (Fullerton) took the first prize. Octobit, led by An An Chang of Northridge, was second and Pavanas, from Long Beach and led by Komal Gada was third.

In services, a firm called Fility at Northridge and led by Asger Mathiasen walked away with the $25,000 first prize. Second was Prospect, led by Raymond Garcia at Fullerton, and third went to Haze Technology out of Dominguez Hills, led by Jason Stone.

Social Enterprises winners focused on nutrition, with the first place winner, Fresh Vend of Los Angeles created a vending machine that could accept EBT cards on college campuses with leadership from Jimmy Can Bacelis. Second place also had food at its center, with Sustainable Bluefin Tuna at Fullerton, led by Young Yang, getting the $10,000. Unwind-Meditation Trainer with Arthur Varin from Long Beach took third.

Once the big prizes had been given out, it was announced that Sunstone had added $10,000 to the prize pot, and the rest of the teams all received $1,000 for various strong points in their presentations.

John Keisler, Sunstone Management’s CEO, told the students that Sunstone will be around for the long haul — the foundation has signed a five-year sponsorship deal. And the competition will expand next year with more universities involved and the finals planned to take place in the South Bay.