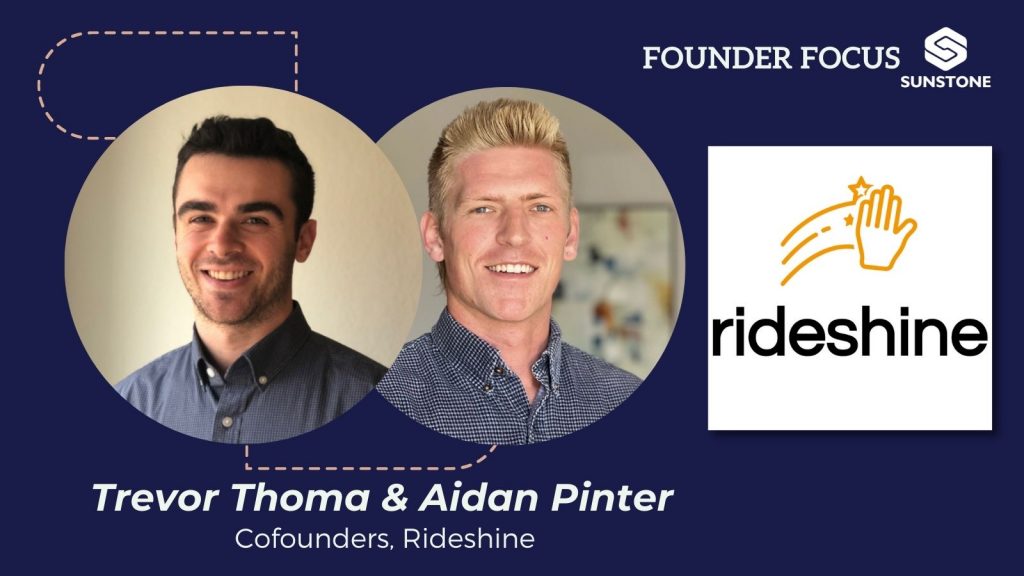 Imagine parking your dirty car for the evening, going up to your apartment for a nice evening and a good night’s sleep — and getting in a clean car in the morning to go to work.

It sounds like a dream. But Trevor Thoma and Aidan Pinter are making the dream come true with their new company, Rideshine.

Thoma and Pinter became friends attending UCLA. Thoma said that the moment he had the idea of washing cars where they were parked instead of expecting car owners to come to a car wash, he knew he had to talk to Pinter.

“Aidan was on top of the list,” Thoma said. “We are good friends, and he’s the smartest guy I know.”

The pair fleshed out the business model — focus on convenience and service with a waterless car wash in a location where there were a lot of cars. That meant overnight work at apartment buildings and condo complexes.

There was just one problem.

“We had to learn how to wash cars,” Thoma laughed. “We knew water-based had too many issues, so we researched waterless options. And we figured it out.”

It didn’t hurt that as Rideshine’s waterless wash ramped up, the western U.S. found itself in a mega-drought. Rideshine marketing emphasizes its environment-friendly approach.

But there was another issue. Neither Pinter nor Thoma had any business experience. Thoma was a data science expert working for the Guitar Center when Rideshine launched.

The solution was in the town where Thoma lives — Long Beach.

“I was doing some research and found the Long Beach Accelerator,” Thoma said.

The LBA is a partnership of Cal State Long Beach’s Institute for Innovation and Entrepreneurship, the city of Long Beach’s Economic Development Department and Sunstone Management. Sunstone helps finance the LBA and provides seed investment to cohort members.

“We were part-time until the LBA,” Thoma said. “Once we got in (a cohort), we were able to take it full-time. Sunstone’s investment was a big part of that.

“We had no experience as a startup,” he added. “We didn’t know how to find investors.”

Thoma and Pinter may have been the least experienced of the eight companies in cohort three, in the second half of 2021. But they took advantage of every meeting in the four-month training course.

“We learned a lot from the other startups in the cohort,” Thoma said. “We were able to make some business-to-business contract connections, too.

“I have to give a shout-out to Andrea (White-Kjoss, LBA managing director),” he added. “She is a huge part of what we learned. She cares a lot, and it shows.”

Thoma said the business started slow — it took six months to put the first revenue in the bank. The model is part of that. First, a building owner or operator must be convinced to allow Rideshine in the parking garage, then residents have to be contacted to sign up for the service.

But once the idea gained some traction, and a few building supervisors recommended Rideshine as an amenity connected to where tenants live, success came down to providing good service. And that’s Rideshine’s specialty.

“We’re all about quality control,” Thoma said. “We started getting Yelp and Google reviews, and every one was five stars. We can take that to new buildings, new companies, and it means something.”

One thing it means is rapid expansion. Rideshine has been a business for less than two years, and graduated from LBA just more than a year ago. Last May, they expanded to Denver, and they have a contract to expand to Las Vegas soon.

And if Thoma has his way, Sunstone will be a part of Rideshine’s future.

“The last conversation we had with them was how we can keep being in the family,” Thoma said. “We’ll be raising our next round soon, and we hope Sunstone will participate. For us, the more Sunstone’s involved, everything has gone well.”